2020 is drawing to a close and is leaving us with another important milestone. On 16th December, Bitcoin reached a new all-time high in the charts, registering a valuation above $20,000. At press time, it was as high at $23,200 but surprisingly certain attributes of Bitcoin failed to register many distinctive changes.

While the price continues to be a big point of discussion, there were few signs that require attention in terms of analyzing future BTC trends.

After Bitcoin hit $10k in July 2020, the community was ecstatic. It was for the first time since dropping below $10,000 during the March crash and there was a sense of renewed optimism in the market. 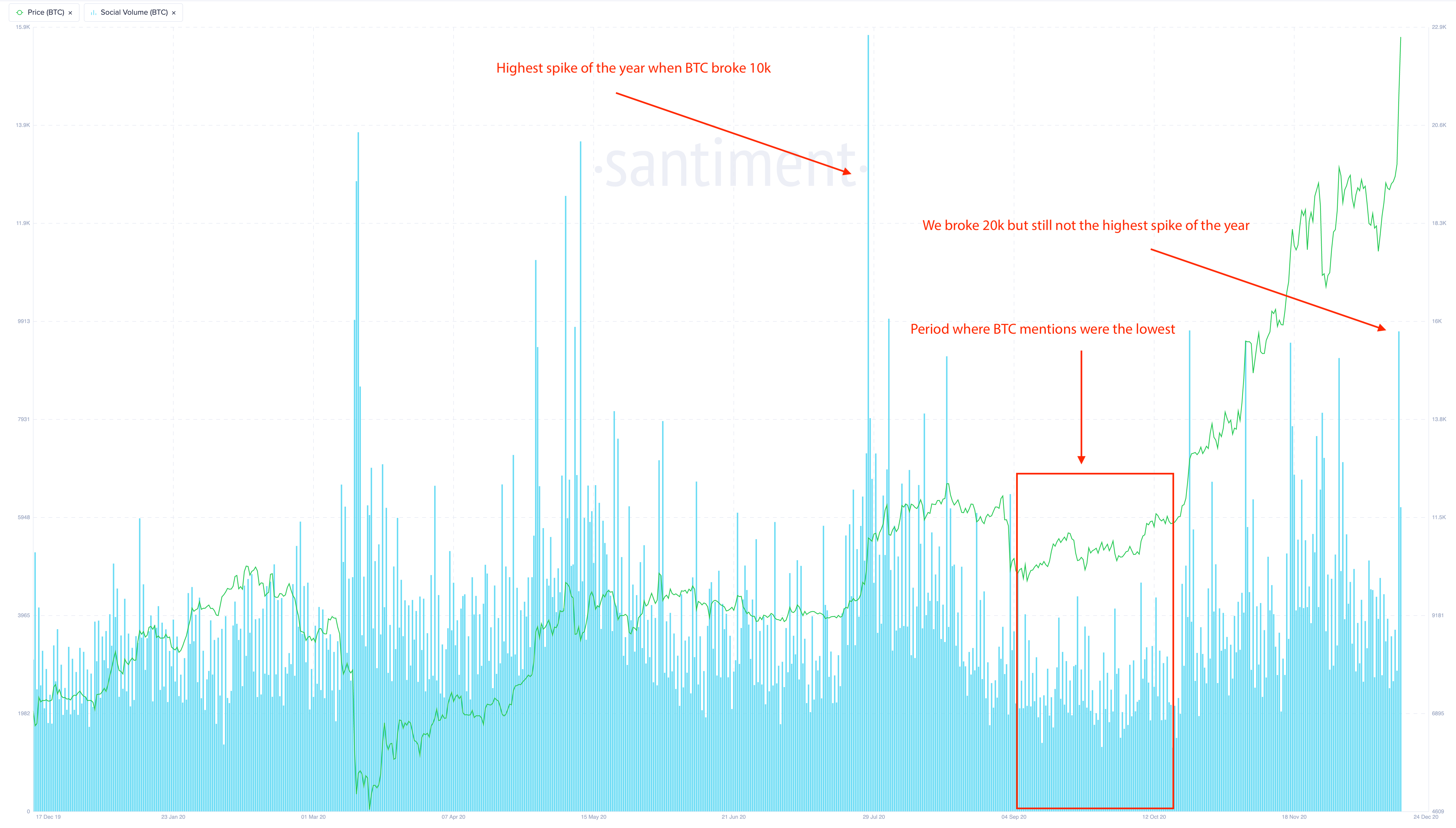 Now, the current price action should have seen an explosion in terms of social sentiment, but that hasn’t been the case. It is important to note that the social volume before the current price rise was at its lowest in 2020.

Bitcoin reached $19,900 almost 3 weeks back and seemingly took forever to attain a new-all time high. Now, it can be argued that human sentiment might be coming into play with concerns over repeated history. The current bull run is oddly taking place around the same period as of December 2017 and any historical repeat in terms of market structure will be catastrophic.

Although a lot has changed in the past three years, the current userbase will possibly be more patient this time around before indulging heavily in the asset.

Although a lot has changed in the past three years, the current userbase will possibly be more patient this time around before indulging heavily in the asset.

Bitcoin price being pushed due to high Short-Liquidations?

Besides the ultra optimistic Perma-bulls, it is fair to state that the majority of the market was bearish in the short-term. After its retracement from $19,900 on November 24th, short-positions had increased on the various derivatives market and the recent CME COT reported suggested a similar frequency in terms of short-contract positions.

With Bitcoin’s price escaping the $20k ceiling, data suggested that close to $535 million were liquidated over the past couple of days, which further pushed BTC’s price in the charts.

Such a push is not organically sustainable, and as the current price reaches a state of equilibrium and long-positions take their profits, the price will eventually pull back again.

Is any analysis dependable at the moment?

From a market analysis perspective, No. Calling a price range for Bitcoin at this point is difficult for anyone since it is in a trading region that is fairly alien. The only difference between now and 2017 is the injection of smart money into its financial landscape, which might make a lot of differences going forward.

Keeping track of developments is more important than ever in Bitcoin, as the largest digital asset enters a new chapter in its existence.

Greatcoin News promises to be a fair and objective portal, where readers can find the best information, recent crypto currency news. Contact us: admin@greatcoin.com

Until 2023, the Thai government offers tax breaks for cryptocurrency payments

Cameron Jackson - May 27, 2022 0
Thailand's government has legally waived VAT for payments made in cryptocurrency via government-approved exchanges. On Tuesday, May 24, 2022, a decree was...

XRP whales are accumulating as their total supply hits a 2-month...